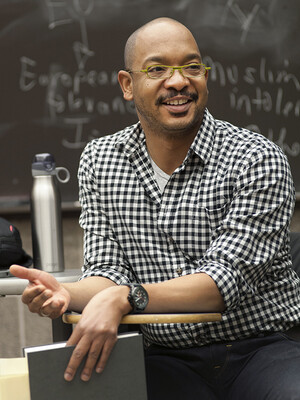 Roderick A. Ferguson, a recognized leader in the study of race, sexuality, and American institutions, has been appointed the William Robertson Coe Professor of Women’s, Gender, and Sexuality Studies, and Professor of American Studies, effective April 17.

He is a member of the Faculty of Arts and Sciences, and is chair of the Program in Women’s, Gender, and Sexuality Studies.

Ferguson joined the Yale faculty in 2019 after holding professorships at the University of Minnesota and the University of Illinois, Chicago; and Fellowships at Princeton and the University of California Humanities Research Institute. He is the author of four books that have defined the methods and vocabulary that scholars of gender and sexuality use to understand how race and gender operate, and that have illuminated the role of higher education in shaping ideas about difference. In “Aberrations in Black: Toward a Queer of Color Critique” (2004), Ferguson introduced the concept of queer of color critique, which has since become a key lens that scholars have borrowed and adapted in order to situate critiques of race, gender, and sexuality within analyses of cultural, economic, and epistemological formations. In providing a history and critique of how the discipline of sociology had contended with race, “Aberrations in Black” anticipates Ferguson’s next book, “The Reorder of Things: The University and Its Pedagogies of Minority Difference” (2012), which provides a never- before-told narrative of how fields like gender studies and Black studies developed in the wake of 1960s and 1970s protest movements, and how the legacies of the student movements were institutionalized by established networks of power. In “We Demand: The University and Student Protests” (2017), Ferguson shows how the progressive forms of knowledge demanded in student protest movements are threatened by anti-intellectualism. In his most recent book “One- Dimensional Queer” (2018) Ferguson complicates the singular narrative of gay rights as a struggle for sexual freedom, instead showing how queer liberation emerged from struggles that crossed the politics of race, gender, class, and sexuality.

In addition, Ferguson has published more than 30 scholarly articles and book chapters that exemplify his wide-ranging intellect: they address topics that include Black art and poetry; marriage equality activism; sexuality and neoliberalism; and questions about class, migration, and anti-racism.

In 2020, Ferguson was awarded the Kessler Award for lifetime achievement from the Center for LGBTQ Studies. In recognition of his leadership in the study of race, sexuality, and American institutions, Ferguson was elected president of the American Studies Association, a position that he held from 2018 to 2019. He serves as co-editor of the “Difference Incorporated” series published for the University of Minnesota Press, a venue for groundbreaking new books on the connections between race, gender, sexuality, knowledge production, and capitalism.

Ferguson has only been at Yale since 2019, but in that short time has played an invaluable role in advancing the work of the Faculty of Arts and Sciences. He is chair of the Program in Women’s, Gender, and Sexuality Studies. He has served on key hiring committees that have brought transformative new faculty to Yale. He chairs the faculty advisory committee of the Yale Prison Education Initiative, and, as a member of the Humanities Doctoral Education Advisory Working Group, helped author the recent report on graduate education in the Humanities. In addition, he served as an advisor for the President’s Committee on Diversity, Inclusion, and Belonging. A sought-after mentor, Ferguson’s teaching interests include the politics of culture, women of color feminism, the study of race, critical university studies, queer social movements, and social theory.