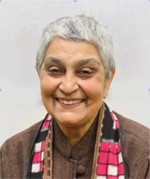 Gayatri Chakravorty Spivak is University Professor and a founding member of the Institute for Comparative Literature and Society at Columbia University. A scholar of postcolonial theory, she is considered one of the world’s leading Marxist-feminist deconstructionists, focusing her efforts on those who are marginalized by history. Since 1986 she has also been active in support of rural education and in feminist and ecological social movements.

Spivak was born in Calcutta, West Bengal, India where her father was a physician and her mother worked for charitable causes. She attended Presidency College, Kolkata, where she earned her degree in English, graduating first with first-class honors in 1959. Borrowing money so that she could travel to the United States, she attended Cornell University, where she earned her doctorate in comparative literature. Her first book, written for young adults, because she already felt the distance between the undergraduate and the critical text, was “Myself Must I Remake: The Life and Poetry of W.B. Yeats” (1974).

In 1976 she distinguished herself in her field for her translation of “Of Grammatology” by Jacques Derrida with a monograph-length introduction. This volume is credited with introducing the theory of deconstruction generally to the United States and to the Anglophone world. Deconstruction — a philosophic approach that explores the ethnocentric assumptions implicit in European philosophy, social theory, anthropology, and other disciplines — has been a force in intellectual history since the 1970s.

Spivak has examined the roles of women and other powerless groups in formerly colonized countries such as India and published the landmark essay “Can The Subaltern Speak?” which explored the inability of the powerless to be heard by those in power. The strict definition of the word “subaltern” is a junior officer in the army or “one who only takes orders,” but, following Antonio Gramsci, the term has been used for marginal social groups to be distinguished from wage labor. In her essay Spivak argued that when the subaltern expresses resistance clearly, he or she cannot be heard by the elite. Her other major publications include “Outside in the Teaching Machine” (1993), “A Critique of Postcolonial Reason: Towards a History of the Vanishing Present” (1999), “Other Asias” (2008), and “An Aesthetic Education in the Era of Globalization” (2012).

After receiving the 2012 Kyoto Prize in Arts and Philosophy in the field of Thought and Ethics, she donated the bulk of her $730,000 cash award to the foundation she established in 1997, the Pares Chandra and Sivani Chakravorty Memorial Foundation for Rural Education, which, enhanced by all of her current and posthumous assets, will fund primary education for children of the rural subaltern. She currently funds six primary schools in the state of West Bengal in India out of her own income, and provides continuous training for local teachers and landless croppers. She travels to India as often as possible to continue this work.

Spivak is the recipient of numerous honorary degrees and in 2013 received the Padma Bhushan, the third-highest civilian award in India.

Your scholarship crosses boundaries and defies easy categorization. You are a philosopher, literary theorist, cultural critic, and teacher. Exploring the dimensions of oppression and otherness through multiple lens, you take on some of the most difficult philosophical concepts and confound those who seek easy answers. A passionate advocate of education for cultivating the habits of democracy, you teach in a rural school you founded in India as well as in universities around the world. Your intellect amazes your colleagues, your scholarship challenges convention, and your commitment to academic inquiry inspires us all. We are pleased to honor you as Doctor of Humanities.