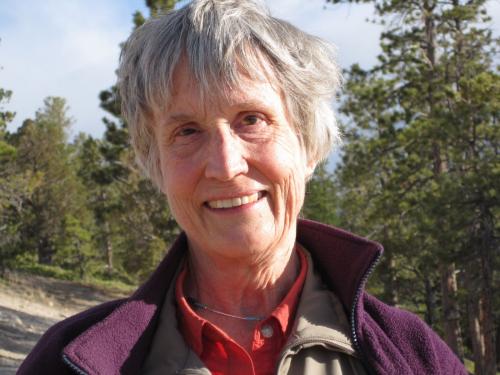 Professor Haraway’s Keynote Speech,  Making Oddkin: Story Telling for Earthly Survival, is now available on YouTube!
Click HERE to link.
********
On the occasion of receiving the Wilbur L. Cross Medal for Distinguished Alumni, one of Yale’s highest honors, Donna J. Haraway gave a public lecture demonstrating the power of narratives that bring together biology, activism, and art. In the lecture, Haraway describes a series of “contact zones” that reveal practices for becoming worldly in a time of unprecedented environmental destruction. And click here for photos from the on-campus events!

Donna Haraway is Distinguished Professor Emerita in the History of Consciousness Department at the University of California Santa Cruz. She earned her PhD in Biology at Yale in 1972 and writes and teaches in science and technology studies, feminist theory, and multispecies studies. She has served as thesis adviser for over 60 doctoral students in several disciplinary and interdisciplinary areas. Haraway is a “below the line” member of the Departments of Anthropology, Feminist Studies, Film and Digital Media, and Environmental Studies; and she is an active participant in the Science and Justice Research Center.

Attending to the intersection of biology with culture and politics, Haraway’s work explores the string figures composed by science fact, science fiction, speculative feminism, speculative fabulation, science and technology studies, and multispecies worlding. Her books include Staying with the Trouble: Making Kin in the Chthulucene (2016); Manifestly Haraway (2016); When Species Meet (2008); The Companion Species Manifesto (2003); The Haraway Reader (2004); Modest_Witness@Second_Millennium (1997); Simians, Cyborgs, and Women (1991); Primate Visions (1989); and Crystals, Fabrics, and Fields (1976, 2004). A feature-length film made by Fabrizio Terravova, titled Donna Haraway: Story Telling for Earthly Survival, was released in 2016. She is currently co-editing a book with Adele Clarke titled “Making Kin Not Population”, which addresses questions of human numbers, feminist anti-racist reproductive and environmental justice, and multispecies flourishing.